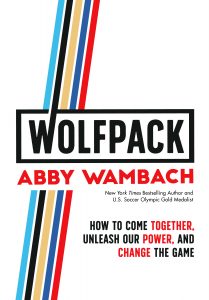 Abby Wambach’s name is synonymous with soccer. A two-time Olympic gold medalist, FIFA World Cup Champion, and the highest all-time goal scorer ever, she is an icon. But, that’s not the whole story. Not by a long shot.

Retiring in 2015 at the age of 35, Wambach found herself, for the first time since she was a young child, without a defining identity or path forward. The year that followed brought her to her knees, but then delivered her into her next, even more powerful act of her life.

She met and married the love of her life, Glennon Doyle, (who’s been a previous guest on this show) and became a parent to three kids. And, Abby decided to redirect the same fierce effort that led her to be a world-class athlete toward becoming an activist for equality and inclusion, a champion of women and human rights. Her new book, Wolfpack, and the movement and company she’s launched along with it, is a reclamation. It’s a call to agency and community. It’s a stake in the ground that defines this next, powerful leg in her journey, and her role in our collective journey together.

We explore this powerful journey, along with many of the deeper motivations, struggles, moments of awakening, defining stories and so much more in today’s powerful conversation.