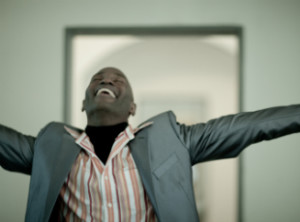 Vernon Bush grew up in the church, but he had a secret…

He could sing, really sing, but he was scared to tell anyone else. Even his parents were in the dark. So he made himself a deal. If his voice was still in hiding when he turned 13, he’d let it out.

The years passed and Vernon finally hit his 13th birthday. It was time to go public. When the head of his church asked if anyone wanted to take the solo, Vernon stepped up. People were surprised, who was this unassuming kid to take the lead?

But when he opened his mouth in front of the church and, for the first time ever, let his voice out, jaws dropped and time stood still.

That moment launched a new path for Vernon that has led him to travel the world singing, teaching, directing music, composing and landing a gig as a soloist at the legendary Glide Memorial Church in San Francisco, where he’s backed by a gospel choir that’ll send chills through your entire body.

In today’s episode, Vernon and I explore his incredible journey. But, that’s not all…

Today is a GLP TV first. A live performance by an amazing vocalist.

I couldn’t leave without asking Vernon to sing. He had no idea I was going to ask, but he strapped on his finger shakers, grabbed a djembe drum and began to sing.

No matter what you do, be sure to stay tuned through the final few minutes of this episode.

If you enjoy the show, go ahead enter your email to subscribe and get instant access to the mp3 vault and weekly insider updates.