Today’s guest, Vanessa Van Edwards, is a behavioral investigator and founder of human behavior research lab, the Science of People.

She’s also known as a human lie-detector, master of influence and someone who has spent her adult life decoding human interaction, influence, social and power dynamics, charisma, likability and more. 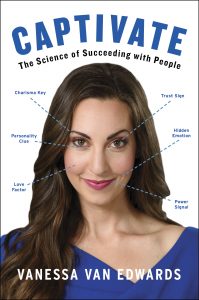 As a geeky, modern-day Dale Carnegie, Vanessa Van Edwards’ innovative work has been featured on NPR, Business Week and CNN. And, her book, CAPTIVATE: The Science of Succeeding with People, is a literal roadmap to decode and, to a certain extent, influence human interaction.

We wanted to learn all about these things, the ideas, the ethics and application. But even more, we wanted to know what unfolded in Van Edward’s life that led her to become so obsessed with the study of what makes us tick. Because it turns out, Vanessa wasn’t always the social savant in the room. In fact, in her earlier life, she pretty much ran from interaction.

So, what happened? The answer and the stories that emerged took us by surprise and also revealed why this pursuit is so close to her heart.

Mentioned in this Episode:

Camp GLP: Summer Camp for Creative Souls, Entrepreneurs & Change-Makers! Join us for 3 ½ mind-bending days that will change everything. The ultimate blend of deep-learning, epic stories, friends-for-life, juicy adventures and ideas, strategies and tools for accelerated personal and business growth! Camp GLP is, more than anything else, about finding your people. Letting your guard down and, maybe for the first time in years (maybe ever), just being you. And knowing that’s enough. Lean more now!