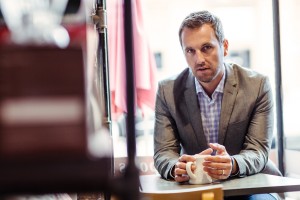 So often, the way the world perceives us conflicts with the what we “think” we’re saying and the way we want to be seen and heard.

Truth is, so much of what we communicate all day long has nothing to do with the words that come out of our mouths.

In fact, often the things we do, the way we move, the things we telegraph contradict the words we offer, leaving people with a sense of cognitive dissonance.

Todd Henry is a master of cultivating the “voice beyond your spoken voice” or what he’d call your “authentic voice.”

A former touring musician and now a bestselling author and international speaker on creativity, intentional living and presence, he’s spent years on everything from country music stages to stadiums, learning how to create magic night after night. What he’d eventually come to realize was, it wasn’t the music that pulled him from ahead, it was the opportunity to teach, to see lightbulbs go on, to create magic and leave people changed. 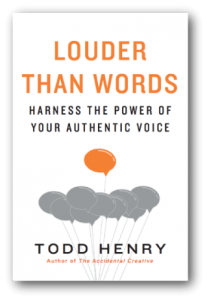 To do this on the level that made a real impact, though, he’d first need to cultivate his authentic voice and presence on a whole different level. Todd writes about this in his latest book, Louder Than Words.

In this week’s wide-ranging conversation, we explore the lessons he learned from the music industry, from playing one night before 50,000 people, then the next at a bowling alley and even the occasional small joint where his band played behind chicken wire to keep them safe.

We also talk about why he walked away from that life, how he embraced a new season and chose to contribute in a way that was better aligned with the future he sought to build. We explore what fame is really about, responsibility and freedom. We dive into the invitation to be original and what stops so many from cultivating their true voices, from no longer being “cover bands.” And so much more.