Tiffany Dufu: What if the Power Move Was to Just Let Go?

When Tiffany Dufu left for summer camp as a teen, both parents dropped her off. Only one picked her up.

She’d soon discover her parents had split while she’d been gone. Not long after, her mom’s boyfriend moved in and began to behave in ways Dufu, a self-described preacher’s daughter, had never been exposed to. When this stranger in her home became violent she left to live with her father and began to rebuild her life. 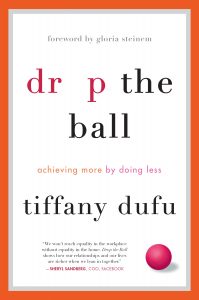 But it wasn’t until years later, when returning from maternity leave to assume her role as Chief Leadership Officer of Levo, that she found herself in crisis-mode, and began to ask deeper questions.

While Dufu had spent years as a strong advocate for women in leadership positions at the highest levels of industry and government, she’d never examined the far more personal roles she and her husband had “defaulted” to in everyday life. She’d never realized how it was stifling her life and stopping her from truly stepping into her potential.

Things had to change. How she navigated this challenging moment, recreated her relationship with her husband and opened space to thrive in life is a major focus of today’s conversation, along with the moments and stories that led to the wisdom in her new book, drop the ball.

Today’s episode is sponsored by Camp GLP, the ultimate summer-camp for entrepreneurs, makers and world-shakers!