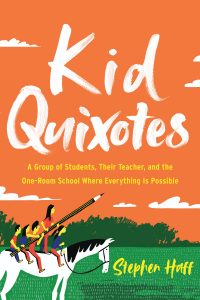 Stephen Haff is the founder of Still Waters in a Storm, a one-room school serving mostly Spanish-speaking immigrant children in Bushwick, Brooklyn. Previously, he taught English at a public school in Bushwick for nearly a decade, before leaving to recover from the effects of extreme psychological stress that led him to re-evaluate how he would return to serve kids as an educator and activist. In his new book, Kid Quixotes. Stephen shares a powerful story about the kids and an incredible 5-year project to translate and perform a modern version of Don Quixote. He earned his MFA in Theater Studies at Yale, and has made a living directing plays and writing essays for the Village Voice and other publications.