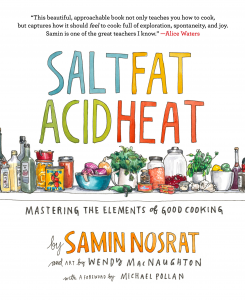 Her New York Times bestselling book, Salt, Fat, Acid, Heat, received the James Beard award for Best General Cookbook and was named Cookbook of the Year by the International Association of Culinary Professionals. Samin’s recent Netflix series of the same name is a stunning exploration of food, culture, travel and life.

Called “the next Julia Child” by NPR’s All Things Considered, Samin has been cooking professionally since 2000, when she first stumbled into the kitchen at Chez Panisse restaurant. An EAT columnist for The New York Times Magazine, Samin lives, cooks, reads, and gardens in Berkeley, California.

In today’s conversation, we explore her journey, growing up the child of first-generation immigrant parents in southern California and feeling like the outsider. We dive into her lifelong love of writing and books, her experience with anxiety and depression and work to be present and joyful in her life. And, we track her “strange left turn” into the world of food and, now, with the massive success of her book and Netflix series, how she’s navigating the pace, exposure and opportunities coming her way.