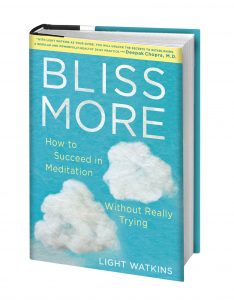 Former Gap fashion model, Light Watkins, began yoga and meditation in-between casting calls in New York City during the late nineties. It opened him to a different worldview and set of practices that would change not only the trajectory of his career, but also his path in life. Deepening his practice, traveling and spending time in India and then apprenticing with his Vedic Meditation teacher, Watkins became a full-time Vedic Meditation teacher in 2007. He now travels the world speaking on happiness, mindfulness, inspiration, and meditation. Light’s most recent book, Bliss More: How to Succeed in Meditation Without Really Trying invites people into meditation in a very accessible way. And, he also produces The Shine—a global pop-up inspirational variety show with a mission to inspire that actually started as a local dinner gathering.