The Joy of Work [For Real] | Sparked Stories 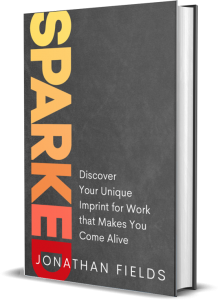 So question for you: When was the last time you did something where it was so immersive, so enjoyable it so captivated, the essence of who you are that you completely lost track of time? You just vanished into the experience, the activity, the moment, the conversation, the relationship, like the world around you ceased to exist. The only thing that you became aware of, if you were even aware of that, was you and the thing that you were doing, or the person or the group of people that you were engaging with or all of those things, but everything outside of that, it just vanished away. And you felt like in that one moment in time, whether it lasted a minute, whether it lasted an hour, whether it lasted a day or a week or a month for whatever window that happened, it was like, the world was, as it should be, your world was, as it should be, you are doing the thing that you were here to do with people.

What if the way you work could give you that feeling? Sounds bizarre, right? It sounds like it’s some sort of, you know, like utopian far-off dream.  But what if that was a lie?

What if there was a way to do the thing that you do and have it feel that way? Not just losing yourself in flow, but also you feel like a sense of purpose. Like you’re working towards something that actually matters to you, a sense of meaning, like who you are and what you’re doing is meaningful. That is what my new book’s Sparked is all about. And along the way beyond the massive dataset we’ve gathered, that shows that you can experience this, have been story, after story, after story, after story use cases, applications, individuals showing up and sharing how they have integrated these ideas into their work and life. And today I’m going to share two of those stories with you. Amazing, powerful, moving, insightful stories, about two people who have done incredible things and continue to do incredible things and have explored how this thing called the Sparketype integrates into the way they do it. So excited to share this conversation with you.