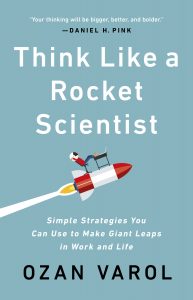 A native of Istanbul, Turkey, Ozan Varol grew up in a family of no English speakers. He learned English as a second language and moved to the United States by himself at 17 to attend Cornell University and major in astrophysics. While there, he served on the operations team for the 2003 Mars Exploration Rovers project that sent two rovers–Spirit and Opportunity–to Mars. He built stuff that went to the red planet and wrote code that snaps photos of the Martian surface. He was on track to built a powerhouse career as a literal rocket scientist.

Leaving Cornell, though, Ozan pivoted and went to law school, graduating first in his class, earning the highest grade point average in his law school’s history, then became a law professor, teaching at Lewis & Clark Law School in his twenties, becoming the youngest tenured professor. While teaching law, there was always a deeper driver, the rocket scientist in him was on a mission to share the scientific process and mindset to influence others to make giant leaps on Earth.

He shares philosophy in the wonderful book, Think Like a Rocket Scientist: Simple Strategies You Can Use to Make Giant Leaps in Work and Life.