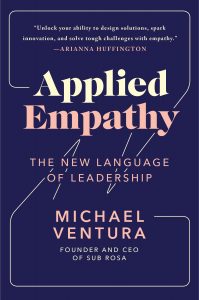 By the age of 25, Michael Ventura had founded and built one of the “hottest” shops in the interactive design world. From the outside-looking-in, he was flying high. But, from the inside looking out, he was riddled with stress and falling apart.

His body eventually gave in, leaving him with three ruptured discs and the prospect of fusion surgery and arthritic pain for the rest of his life. At the same time, the economy crashed, decimating his business.

He saw this as a wake-up call, both personal and professional. Ventura began to explore an alternative path to healing that led him not only back to full recovery without surgery, but on his path to becoming a practitioner of eastern and indigenous medicine, working through his private practice, Corvus Medicine as a healer.

At the same time, he rallied the tiny group of remaining employees to redefine what their company was about and stand in a place of radical honesty and vulnerability with their clients. Relaunching in 2009, as Sub Rosa, they’ve grown into an award-winning, strategy and design practice with a focus on what they called Applied Empathy, which also happens to be the name of Ventura’s latest book.