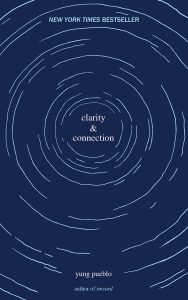 Born in Guayaquil Ecuador, Deigo Perez – who is known by the pseudonym Yung Pueblo – moved with his family to Boston, where he saw his parents work relentless hours and struggle with poverty. He turned to activism and advocacy at a young age, then attended Wesleyan where his life devolved into partying and drugs that threatened to become his way of being as he moved into adulthood. But a moment of reckoning would awaken him both to his need to refocus on mental and physical wellbeing, as well as recenter meaning in his work and life.

A quest was set in motion, one that would eventually lead Diego into a 10-day vipassana meditation experience that had a profound impact and would set him on a path of self-discovery, and an ever-deepening devotion to a now years-long, 2-hour-a-day meditation practice, regular extended retreats, and the pursuit of truth and wisdom. A part of that exploration also involved writing, and what began as a tool to process his own experiences eventually became a public writing practice. His words landed in a powerful way, amassing a global audience of millions of people, writing under the pseudonym, Yung Pueblo, which is both a reminder to him to stay grounded in a younger, growth mindset, and also a contained to frame this current season of work as a project that doesn’t constrain his own personal and professional growth. Diego’s new book, Clarity & Connection, shares many of his recent insights about life, meaning, love, work, self-awareness, and of course, clarity and connection.