Daniel Goleman: The Truth About Meditation (a scientific look).

What if much of the popular wisdom and even so-called valid research on meditation…was wrong?! According to Daniel Goleman, it’s time for a meditation wake-up call.

Best known for his worldwide bestseller Emotional Intelligence, Goleman reveals powerful new truths about meditation, what it really is and isn’t, and how only about 1% of the 6,000+ studies done on the topic are what might be considered “good science.” 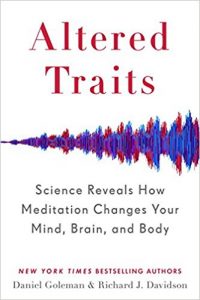 A lifelong student of meditation and meditative practices, Daniel Goleman spent two years in India, first as a Harvard Predoctoral Traveling Fellow and then again on a Post-Doctoral Fellowship, followed by decades of practice and study. He has moderated several Mind and Life dialogues between the Dalai Lama and scientists, ranging from topics such as Emotions and Health to Environment, Ethics and Interdependence.

In his new book, Altered Traits: Science Reveals How Meditation Changes Your Mind, Brain and Body, he pulls back the curtain on this practice, dives into the claims and show what’s fact and what’s pretty seriously stretching the truth. The bad news, there’s a whole lot of fiction in the meditation space. The good news is, there are also many profoundly life-enhancing changes that come your way. Meditation, it turns out, changes you, on the level of DNA. In this conversation, you’ll discover the real benefits of this powerful practice.