Charity Tillemann-Dick: Singing For Her Life (with someone else’s lungs).

Charity Tillemann-Dick grew up in Denver, CO, with her 10 brothers and sisters. She loved to sing from her earliest memories, so she did the logical thing; graduated high school 3 years early, sped through college…and became a political operative by her late teens! What?! 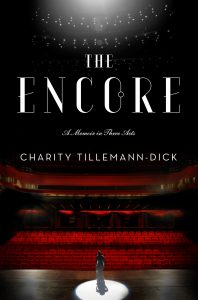 All the while, though, she continued to sing on the side, until Charity was eventually “discovered” by a legendary opera teacher, who took her under her wing and gave her a full-ride to study at the legendary Franz Liszt Academy of Music in Budapest, Hungary. In an instant, everything changed, a new career was born. Charity became a sought-after soprano and top-selling classical recording artist, performing all over the world.

But, something was wrong. Her lungs, the very source not just of her life, but of her vocation, began to fail. Diagnosed with potentially fatal pulmonary hypertension, she had two double lung transplants, the second coming after the first pair of lungs was rejected. Still, each time, she found a way not just to sing again, but to come alive, and also become an evangelist for transplants and medical research. Her story is detailed in her memoir, The Encore. We explore this, journey, along with a beautiful love story, her relationship with faith and so much more along the way.