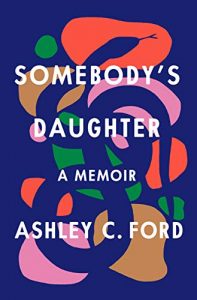 Ashley C. Ford lives in Brooklyn by way of Indiana, and she has a lot of jobs. She’s currently writing her memoir, Somebody’s Daughter, hosts The Chronicles of Now podcast, and is the former host of seasons one & three of Mastercard’s Fortune Favors The Bold, as well as PROFILE by BuzzFeed News, and Brooklyn-based news & culture TV show, 112BK.

Ford has written or guest-edited for The Guardian, ELLE, BuzzFeed, OUT, Slate, New York Magazine, Allure, Marie Claire, The New York Times and tons of other places. She’s taught creative nonfiction writing at The New School and Catapult.Co, and had her work listed among Longform & Longread’s Best of.

While working as an executive for Matter Studios, Ashley developed a web series and documentaries. She was also the host of the first season of Audible.Com’s literary interview series, Authorized. was named to Forbes 30 Under 30 in Media, Brooklyn Magazine’s Brooklyn 100, and Variety’s New Power of New York (2019). Simply put, she is a force. But, she is also just a straight-up joyful, real, fiercely creative, purpose-led, alive, and deeply kind human being. That’s why we wanted to share this deeply honest and inspiring Best Of conversation with you today.