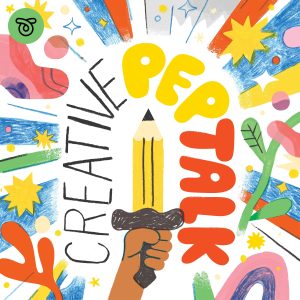 Imagine going through life with the name, Andy J. Pizza. That’s what my guest today goes by, but it wasn’t his given name, but rather his claimed name. More on that when we talk. Andy was the kid who perpetually zagged when everyone else zigged. And, at a young age, he saw this same pattern in his mother, he was so much like her. Which, in part, lit him up, but also terrified him. In his mom, these same impulses were married to mental illness that led to a life of struggle. He feared that’s where he was headed, too, until a realization dropped that would not only lead him down his own path, but also empower him to embrace life differently and trust he could make it work. And, indeed, he has.

Andy has built a stunning career as an illustrator, author of kid’s books, animator, and contributor to The New York Times, Apple, Nickelodeon and countless other mega-brands. Driven to share and inspire others in the creative community, he heads up the fantastic Creative Pep Talk podcast, where, by the way, I was his guest recently. And, Andy is a master of the stage, with a style of public speaking that’s one part TED Talk, one part one-man show — with a sprinkle of stand-up comedy. His friends call his approach Laydown Tragedy ( 😆) – because it’s the opposite of stand-up comedy, in that instead of shooting for laughs, he aim for tears, but in the best of ways!